The judicial system is alive and well

I have to start this post with a confession–pun intended. I haven’t been following the Casey Anthony case on television. The whole ordeal has been dragging on for far too long, and I’ve not been home during the day to catch any of the action. After the verdict was read today, I wished that I had been paying attention all along. Social media was ablaze with comments saying that justice wasn’t served with this verdict and that Anthony got away with murder. The Casey Anthony trial seemed to be another O.J. Simpson debacle.

I was saddened to discover that the case is not so contentious. 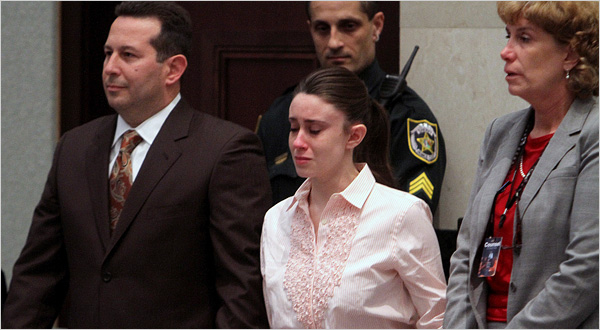 I started reading news articles from the Post and the Times, rather than listening to people yelling about the case on TV and Twitter. It seemed that every reporter from every major outlet has mentioned that no actual evidence of a crime was actually presented to the jury. Everything presented in court was circumstantial, simply a possible theory to explain the death of Caylee Anthony. There wasn’t even a determined cause of death.

We don’t know how Caylee died. Nor do the police. Nor do the prosecutors. The autopsy was inconclusive. (Paul Duggan, The Washington Post)

[T]he circumstantial nature of the prosecution’s case seemed to be insurmountable. There was no direct evidence tying Ms. Anthony to the death of her daughter. Forensic evidence was tenuous, and no witnesses ever connected her to Caylee’s death. Investigators found no traces of Ms. Anthony’s DNA or irrefutable signs of chloroform or decomposition inside the trunk of Ms. Anthony’s car, where prosecutors said she stashed Caylee before disposing of her body. The prosecution was also hurt by the fact that nobody knows exactly when or how Caylee died; her body was too badly decomposed to pinpoint cause of death. (Lizette Alvarez, The New York Times)

I asked a friend of mine, Prof. Toni Locy, what she thought of the case. She hadn’t been following the case either, calling it a “Nancy Grace creation.” But we compared notes, and decided, as she said, “A guess at how and why wasn’t enough.”

That’s one of the great things about the American justice system: that whoever seems the most ”suspicious” doesn’t get sent straight to the gas chamber. It is the job of the prosecutor of a murder case to convince a jury of the defendant’s guilt beyond a reasonable doubt. If the jury members were left with as many questions as we all were, they did the right thing by not convicting Anthony of the murder.

Locy agreed. “To me,” she said, “that means the jury system worked.”